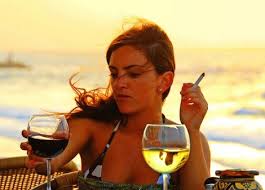 Do you suffer from addictions and wonder what that says about you energetically? Here is a great chart from ‘The Subtle Body: An Encyclopedia of Your Energetic Anatomy’ by Cyndi Dale. This chart helps you to figure out your energetic problem areas.

Chakras as They Correlate to Addictions & Behaviors

Fourth Chakra: Ecstacy (the drug); love (as in having to be in love all the time); specific relationships (persons you can’t “let go of”); smoking, wine, sugar, sweets, and false sugars, such as saccharin or aspartame.

Sixth Chakra: Self-hatred (as in poor body image); appearances (as in compulsively worrying about); chocolate; and all mood-altering substances and behaviors, including hand-washing, criticalness, and more.

Sonya is a competitive sprinter who lives in an athletes’ world; attending Olympic trials, training amongst champions, and constantly looking for ways to become the best she can be. Sonya and I met because I am a bit of an athlete-lover and we bonded instantly over our combined love for speedy, muscular legs. When I told her about my practice, she was instantly intrigued and scheduled a session right away!

In the beginning of Sonya’s session she could immediately feel what I was doing. She was excited and began to ask me questions. I told her that I could not answer questions because I am not even close to being ‘that good’ yet!

At the end of the treatment she reported feeling pulling from the top of her scalp to her feet as though she were about to be sucked into the ground by gravity. She also felt buzzing in her arms and an overall feeling of greatness.

As I concluded the treatment she had a large emotional release and began to cry. She said that she was unsure why but she just felt like crying and I suggested to her that she probably needed to release some pent up sadness – it was an educated guess, I suppose.

We didn’t work on a specific area because she is not an individual with pain so I explained to her that I felt a sharp sensation (best way I can describe it) when working on her sacral chakra and thought there may have been some trauma to that area so I worked there for the majority of the session. She then confirmed that there had in fact been trauma to that area and she was ‘lucky to be alive’. I intuitively knew that this was where the tears had come from.

After the session Sonya reported feeling like a champion. She also said that she would send every athlete she knew my way!

… Sounds like I’ll be in the athletic heaven for healing-hands pretty soon!

In any case, I am continually impressed with this healing modality and cannot wait to get back to Calgary for my next installment!

In any case, when you get the chance, take off your shoes, head to the nearest green space and walk, run, or just stand without your shoes on.

I suggest that you try to do something that is difficult, something you know will challenge you physically – then notice how much easier it feels.

Learn more about ‘Grounding’ or ‘Earthing’ your energy here.

Be sure to come back and let me know how it went!

Your sacral chakra is the 2nd energy wheel just above the root chakra located approximately 2 inches below the navel. This Chakra is related to your reproductive organs and is related to human emotion; feeling, pleasure, connection, and creativity.

Its Hindu name “Swadhisthan” translates as “sweetness”. When this energy wheel is flowing freely; in a healthy manner, you are in touch with your emotions, able to decipher the difference between your own emotions and the feelings of others, and you are able to allow yourself physical pleasure free of guilt.

As a developing youngster, 6-24 months, as you are beginning to separate from your mother; gaining your own personal autonomy, your feelings come into play. During this stage, in order to have a healthy sacral chakra, it is important for your needs to be met through affection and nurturing attention. A stressful environment or an absent parent (and many other common scenarios) can cause dysfunction in this energy center at a very young age stunting bio-energetic development.

The symptoms of a dysfunctional second chakra are:

Emotional : Guilt, Embarrassment, Shame, Distrust, Impatience, Desire to hide, Nervousness, Holding on, Uptight, Frustration, Inadequacy, Anger, Tendency to push for things, Feeling victimized, Expecting the worst, Numbness, Neediness, Detaching from oneself and going out of body, Feeling shut down, Depression, Denying your own needs, Not supporting yourself, Blaming others, Anger at a mate, Punishing oneself, Denial of self, Rejecting femininity or masculinity, Bitter words left unspoken, Sexual pressure, Tension, Rigid social beliefs, Spite against a previous mate, Fear of mother, Emotional overflow, Years of controlling emotions, Fear of father, Denial of pleasure, A belief that sex or intimacy/touch is bad.

Soft addictions, such as overeating or addiction to junk food or other foods is related to the second chakra dysfunction.

It seems intuitively obvious that dysfunction in the sacral chakra is a widespread issue. The more that people understand how their human energy system works, the more in-tune individuals will be with their physical bodies allowing energetic health and creative solutions to the myriad of problems waiting for solutions!

People throw the word energy around as often and thoughtlessly as teenagers use the word ‘like’. People say things like: “I have low energy”, “I have no energy”, and I’ve even heard people say “My kids have too much energy!”

All too often they view the term energy as a saying; an imaginary and invisible ‘thing’ with no real substance when in fact energy is as real as the keyboard I’m typing on… it just moves at a different frequency that your eyes may not be able to see.

So what is the real definition of energy?

We also know that energy exists within the earth – this is apparent when a volcano erupts, an earthquake shakes, or a seedling sprouts from the ground and reaches its leaves up towards the light.

But did you know that human beings are also made of energy? And not only are we made of it and from it, but it is the force that keeps us healthy, vibrant, and alive. When it is blocked, we become diseased.

The human body has many energy centers and the main energy centers are often referred to as ‘Chakras’; an ancient Hindu term literally meaning  “wheel”, “disk” or “centre” in Samskrit. These ‘Chakras or spinning wheels of energy are located in 7 different areas on our bodies; each one corresponding to different organs, emotions, and life cycles (as in our choices, relationships, communication, creativity, intuition, and physical / mental stability). There are 5 horizontal streams of energy that  manifest our personality and relationship with the outside world and there are 2 vertical streams that feed energy from the earth and from the cosmos or universe into our system the same way electrical cords plug into  outlets. There are also energy meridians that connect inside of our bodies to disperse the energy that is being filtered in from the chakras.

(In the picture shown, the large, circular, coloured streams are chakras, the colored lines are energy meridians, and the white light surrounding the body is the energy charged aura or torus that is created by the chakras)

What is blocked energy?

When energy centers become blocked for long periods of time and are not cleared, illness occurs. This illness can come in the form of weight gain, back pain, arthritis, loss of eye sight, loss of hearing, cancer – our bodies are actually very creative in expressing illness.

Most people simply do not realize the powerful impact that their thought streams have on their health. Nor do we understand the negative effects of moving against our personal intuitive grains – working at jobs we hate, remaining in unhealthy relationships, etc. Negative thoughts, such as fear, guilt, and blame, clog up and block energy centers leaving human beings feeling tired, cranky, sick, and finally diseased if it goes untreated for long enough.

What can you do to clear your energy?

One of the first things you can do to clear your energy and become healthier is learn more about it.

A great book on human energy is: The Subtle Body by Cyndi Dale. Once you know more about how your personal energetic subtle body works, you can begin changing your thought streams and also your health.

Purchasing the Bio-Chip is also a great way to learn more about your energy system.

And of course, you can also try some Bio-Energy Healing sessions. If you’re in Toronto, perhaps I can help! If you’re in Calgary or Vancouver, I can point you in the right direction as well.

Error: Twitter did not respond. Please wait a few minutes and refresh this page.